What do we know about the 2nd Mass and the American Revolution?

The Boys of Maxwell's Company

Our Regiment’s late war impression is based upon Capt. Hugh Maxwell’s Company in the late summer and early fall of 1779.  The information in this article is intended to give a short overview of the composition of Maxwell’s company in the late summer of 1779 and also to serve as a starting point for further research on the officers and soldiers enlisted in the company.

In August of 1779 Maxwell’s company was the 1st Company of Bailey’s Regiment.  The company consisted of 1 Captain, 1 Lieutenant, 1 Ensign, 3 Sergeants, 3 Corporals, and 37 Privates for a total of 48 officers and men. This structure exemplifies the standard structure of a full-strength company as described by Von Steuben (although the company was less than the 56 rank and file allowed by the establishment). While the roll demonstrates a typical Von Steuben company, it is important to note that not all men were present and serving with the company each month (some might be sick, some on leave, some on other duties, etc.). The September 1779 return shows only 28 Rank & File present for duty with 2 men sick and absent and 11 men on command performing various duties.

Where did the men of Maxwell’s company live?  They had been recruited from a number of towns from Massachusetts with a great majority of the men from Middlesex (52%) and Franklin (27%) Counties.  The two towns contributing the greatest number of men are Townsend (35%) and Charlemont (17%) (home of Captain Maxwell).  (See Table 1 for a complete breakdown.) 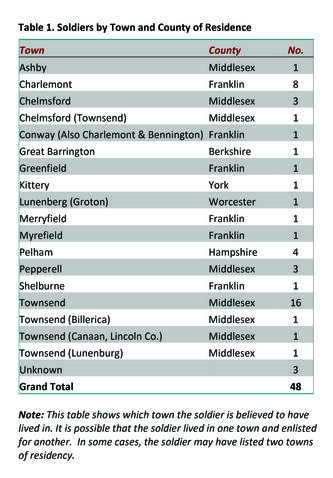 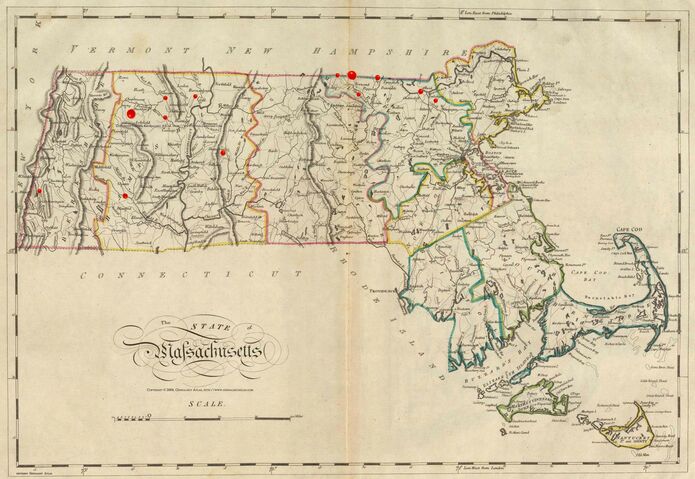 How experienced as soldiers were the men of Maxwells?

While the company itself was not formed within Bailey’s Regiment until start of 1777 (Maxwell was appointed Captain on January 1, 1777), the majority of men are experienced soldiers by 1779 with 38% of them serving since 1775/6 with over 4 years of experience in the army and another 21% having joined in 1777/8 with 1 to 2 years of experience in the army.  Only 4 of the soldiers in Maxwell’s company are known to have joined in 1779. (See Table 2. )

It is also important to note that most of the men in the company had joined for the period of 3 years of the war. In addition to these experienced soldiers, 13 nine-month levies appear on the return for September, 1779.

The research in this area of experience is incomplete because we do not know when 16 of the men (33%) first joined the army. 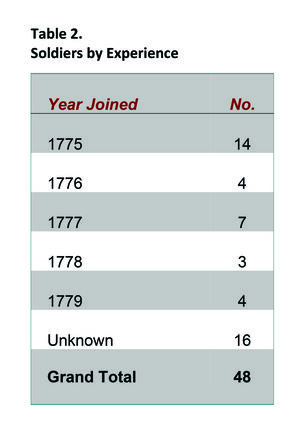 Note: This table shows when the soldier first joined the military during the war and is different from his first appointment in Maxwell’s company. 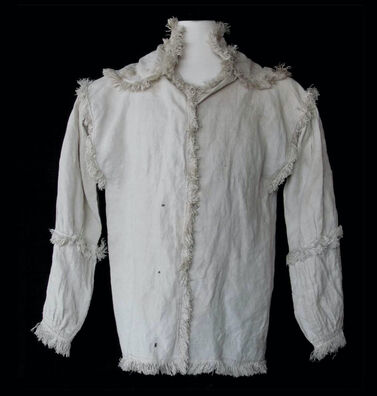 In the summer of 1775, riflemen from Pennsylvania, Maryland, and Virginia joined the New England troops already gathered in Boston to form a Continental Army. Many of these southern soldiers wore fringed linen hunting shirts like this example.

As stories of the riflemen’s marksmanship spread, General Washington saw a psychological advantage in outfitting thousands more of the American soldiers in these distinctive shirts.

On July 24, 1776, Washington wrote that he “earnestly encourages the use of hunting shirts,” in part because they were “justly supposed to carry no small terror to the enemy, who think every such person a complete marksman.”

In the files of the National Archives are digitized versions of the original rosters of state and continental troops that served during the Revolutionary War.   Although seeing the information is interesting enough, seeing the actual handwritten troop rosters is even more exciting.

Colonial troops were able to defend Boston Harbor from British forces - causing significant casualties to the enemy - until running out of ammunition.  Although the colonists  were ultimately forced to retreat to Cambridge, the battle demonstrated that inexperienced militia were able to stand up to regular army troops

After General George Washington‘s crossing of the Delaware River north of Trenton the previous night, Washington led the main body of the Continental Army against Hessian soldiers garrisoned at Trenton. After a brief battle, nearly the entire Hessian force was captured, with negligible losses to the Americans. The battle significantly boosted the Continental Army’s flagging morale, and inspired re-enlistments.

Following the surprise attack at Trenton, General George Washington decided to attack the British in New Jersey before entering winter quarters. His troops  advanced to Princeton by a back road, where they pushed back a smaller British force but had to retreat before Cornwallis arrived with reinforcements.  A few nights later, they evacuated their position, circled around Cornwallis' army, and attacked the British garrison at Princeton. The British ultimately surrendered and, with their third defeat in ten days, the British evacuated southern New Jersey.

The climax of the Saratoga campaign, the Battles of Saratoga gave a decisive victory to the Americans over the British in the American Revolutionary War. British General John Burgoyne led a large invasion army southward from Canada in the Champlain Valley, hoping to meet a similar British force marching northward from New York City and another British force marching eastward from Lake Ontario; the southern and western forces never arrived, and Burgoyne was surrounded by American forces in upstate New York.  He surrendered his entire army there on October 17.

The Battle of Bunker Hill

The Battle of Monmouth was fought in New Jersey and was part of the Philadelphia Campaign 1777-78.  The Continental Army attacked the rear of the British Army column as they left Monmouth Court House.  General Washington fought his opponent to a standstill after a pitched and prolonged engagement.  The battle demonstrated the growing effectiveness of the Continental Army after its six-month encampment at Valley Forge, where constant drilling under officers such as Major Generals Friedrich Wilhelm von Steuben and Marquis de Lafayette greatly improved discipline and morale.

THE 2ND MASS IN THE AMERICAN REVOLUTION

We've put our battle timeline on a limited edition T-shirt

We think this shirt is pretty cool.  We've put our Battle Timeline graphic from above onto the back of a collectible 2nd Mass t-shirt.  The front sports the 2nd Mass logo on the left chest.  Available in unisex adult sizes. 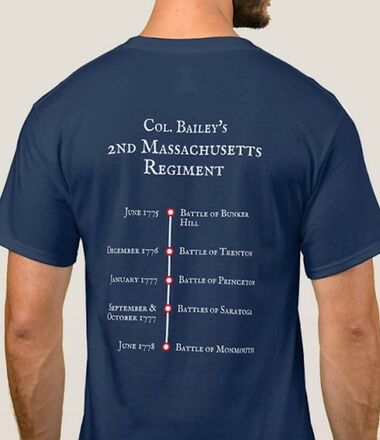 240th anniversary of the Battle of Monmouth, held at Monmouth Battlefield State Park in New Jersey in June 2018.